For the wide array, from Jun 26 to Jul 18, there is some confusion about the bottom level downwind sonic anemometers on towers 4, 5 and 6. The variable names from these sonics have suffixes of 4b, 5b and 6b, indicating what tower they were on.

The intended configuration for the sonics is as follows, along with the serial numbers that Kurt wrote in his setup notes:

The samples are archived with the sensor ids, so after the data has been sampled, knowing the relation between location and sensor id is critical, and is what needs to be determined for these sonics.

So far nothing has indicated any error in Kurt's setup notes of the relation between location and serial number.

The configuration of the later arrays also confirms Kurt's notes for the wide array, because when the sonics were moved to the medium and narrow arrays, care was taken to keep them in their respective locations.

Tom's documentation of the serial number/serial port relation for the medium spaced array, https://wiki.ucar.edu/x/OYWgAQ, agrees with the above serial port to serial number relation.

SteveO's entry for the narrow array, https://wiki.ucar.edu/x/W4CqAQ, also agrees with the above.

In setting up these arrays, care was presumably taken to get the cabling right, so that we're also confident of the mapping from serial port to location during those configurations.

In log entry https://wiki.ucar.edu/x/tBR_AQ, Tom used rserial to record the sonic serial numbers at each serial port for the wide array, and noted the following results:

From this he concluded that the cabling from serial ports to the sonics was crossed up from the intended configuration.

The XML specifies what sensor id is assigned by the DSM to each sample received on a serial port. I believe the XML was checked at that time, and it contained the intended mapping from serial port to sensor id. So at that time it appeared that the actual relation between sensor id and location on the wide array was as follows:

If the above relation of sensor id to location was true, then our data processing, which used the intended configuration, assigned wrong location suffixes to the data from those sonics for the wide array.

There are several counter-arguments to the above, indicating that Tom somehow confused the serial ports in his log message, and that the cabling matched the intended configuration in the wide array.

First, the serial number to sensor id relation can be read from the data archive, since the rserial output is archived. The serial number messages from the archive of the wide array are shown here, with their sample times:

Perhaps two mistakes were made which cancelled each other: cross-cabling, and the complement association between serial port and sensor id in the XML? Or perhaps the XML on the DSM was corrected to match the cabling shortly after the wide array started, and then corrected back for the medium spaced array? Both seem unlikely. The sequence of the above serial numbers suggest that neither of the above occurred, and that the serial ports were recorded incorrectly in Tom's log message.

The sensor ids have not been altered in the archive after it was recorded, since the modification times of the files have been preserved and match the original recording times.

Steve Oncley also looked at data during dust devil events from these sonics during the wide array, and the spacial continuity of the relative wind directions indicate that the sonics were in the intended configuration.

The tt_adjust program has been run on the AHATS unsorted raw data. One of the results of the processing is a linear fit of the relation of the sample time tag to the sample number, for every 1/2 hour. The slope of the fit is the sampling period of the sensor, which for sonics at 60Hz, should be about 16666.7 microseconds. Systematic differences between the sample periods of individual sonics can be seen, which provide another indication of the relation between the sensor id and the sonic serial numbers.

The sampling rates show a diurnal temperature dependence, but one can distinguish the individual sonics. Below is a plot of sample delta-T for sensor ids 2040, 2050 and 2060 for the entire project, showing that the serial number to sensor id mapping did not change for these sonics during the project. The sensor id is shown in the trace legend. 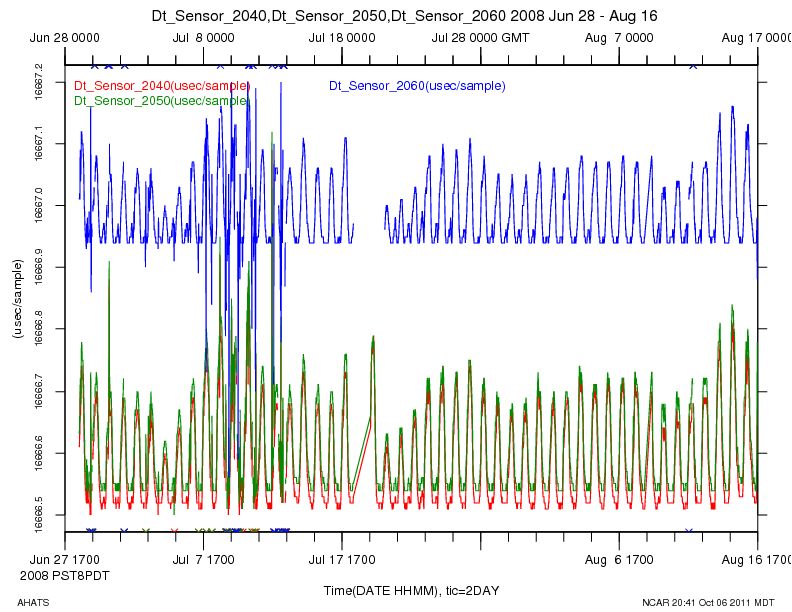 The data is a bit noisy during the wide array, but it seems quite certain that the relation of serial number to sensor id did not change: 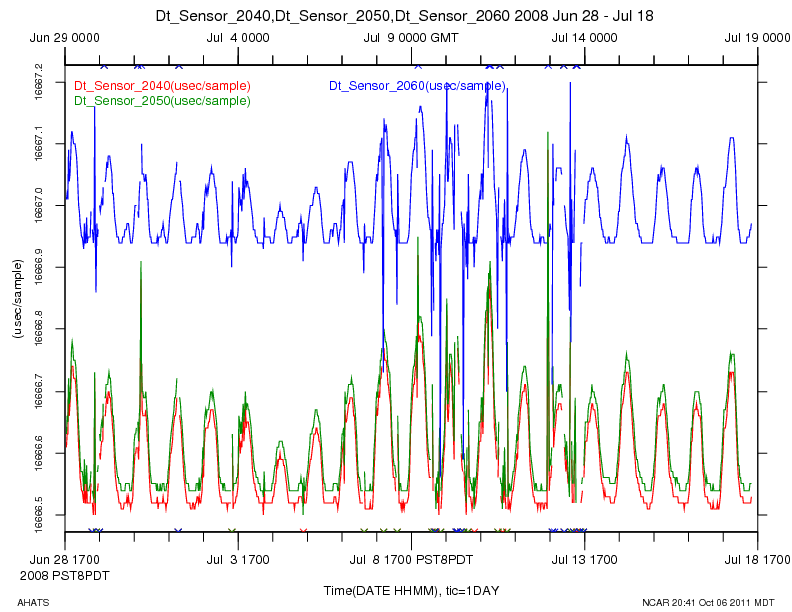 For all sonics connected to downwind1, here is the serial number information in the archive: