I just used the opportunity of staging for ARTSE to evaluate the effect of not cleaning our radiometers during Perdigao.  All of the Perdigao radiometers were packed without being cleaned, to enable this test to be done.  However, it is possible that the stretchy film that is part of the NR01 packing may have wiped some stuff off of the domes.  Two of these NR01s were brought back (by me) by hand – the rest are still in the seatainer.

Today (27 July), which is partly cloudy with boundary-layer Cu, we installed NR01 #7 at approximately 13:00 (local).  At approximately 14:43, I cleaned it during a period when the sun disk was clear of clouds.  The order was: wetting Rsw.in, Rlw.in, Rlw.out, Rsw.out, then wiping in the same order.  At the end of this cleaning, I added water to the wetness sensor, left the water on for about 10s, and wiped it clean, just as an indicator flag.  I ran rserial during this cleaning on a laptop.

From the rserial output, I see Rsw.in change from about 926 W/m2 before cleaning to 912 W/m2 after.  Thus, the effect of the dirt/pollen/smoke/oil/etc. was an enhancement of incoming solar radiation by about 1.4%.  Obviously, the primary effect of the dirt was to enlarge the image of the solar disk.  This effect will be difficult to model and thus correct the data.  It would have been a good idea to measure the direct and diffuse radiation separately.  When I measure the other NR01, I'll also take data using the shadowing paddle.

In this case, the results were:

All of these changes are quite small, <1%.  In the case of Rlw.in, my head in the field of view may have affected the results.  Thus, this radiometer did not require this full procedure and we will not have to correct its data.  Nevertheless, we should repeat this procedure on all the other radiometers when they return.

Approximately same procedure as Round 2, now with the remaining NR01s from the seatainer.  All but 2 Rsw.in values were lower after cleaning, however most data were taken during the afternoon when light was decreasing.  Time series were logged through minicom capture.  I used yet another new paddle, this one with aluminum tape (shiny) towards the sun, electricians tape (black) towards the sensor.

The final table with the analysis so far:

These data support the following conclusions:

Overall, not terrible results, though radiation to 2% certainly isn't up to our usual standards. My time trend analysis could be improved, but probably won't change the general trend here. 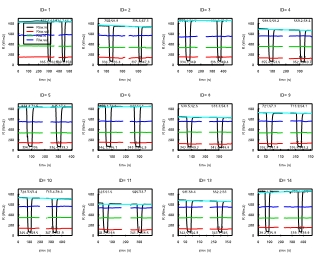 Next step – repeat these tests on the 4-component sensors!