John Taylor, of Cambridge University, provided this image generated by VAPOR, and appearing in the November 2 issue of Science. 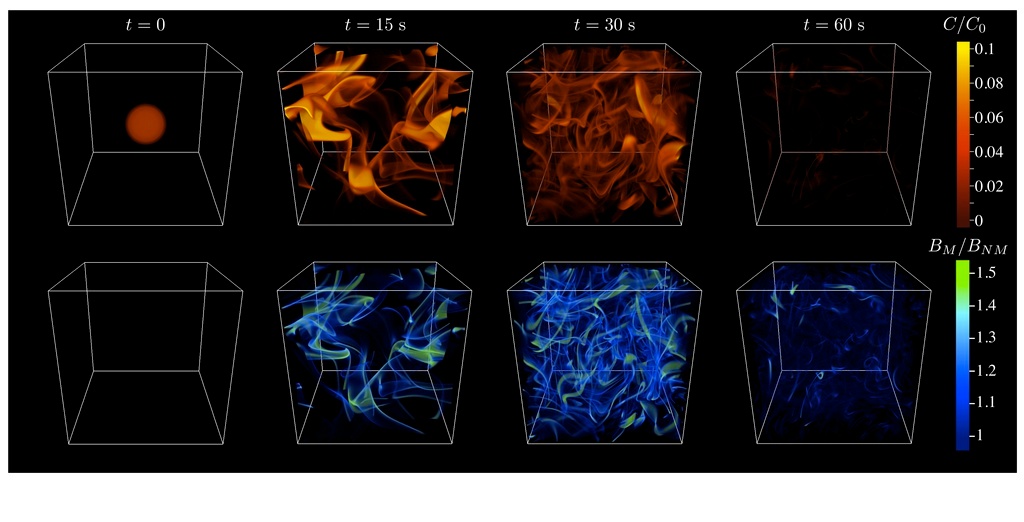 Project information is available at: http://www.vapor.ucar.edu

Efforts to integrate prototype depth peeling support into vaporgui, which enables the display of semi-transparent objects without prohibitively expensive visibility sorting, continued, and are expected to be completed in time for the production release of VAPOR 2.2.0. However, due to a number of outstanding bugs a decision was made not to included depth peeling in release candidate #1.

John worked with LLNL's Hank Childs to complete efforts to develop and test a parallel VDC reader for the DOE's VisIt application.

The end of the period of performance for the Year Two KISTI contract occurred in the month of November. All project milestones were met, and a final written report was submitted to KISTI. We are currently preparing an SOW for a third year of funding (which will need to be approved by KISTI's oversight body), and are making arrangements for two Korean graduate students to visit NCAR for a two month stay starting in January.

Release candidate 1 of VAPOR version 2.2.0 was completed and made available to friendly users on Nov. 30. The timing of the release coincided with promised deliverables for the Year Two KISTI contract. Efforts to prepare RC1 included:

To facilitate conversion between netCDF data and VAPOR's VDC a new command line utility, ncdfvdfcreate, was developed to automate the generation of .vdf files in a manner analogous to the extant wrfvdfcreate and momvdfcreate command line tools. The new utility is built upon the previously developed NCDFCollection class object, which provides simplified access methods for operating on a collection of netCDF files that represent a model output time series. Moreover, the existing ncdf2vdf and vdfcreate utilities were refactored to use the NCDFCollection class object, which among other benefits reduces redundant code and helps provide a more consistent set of user command line options.

Due to the instability of Yellowstone a decision was made to not require awardees to produce a representative visualization of their work in time for SC12. Nevertheless, progress was made with some of the participants: