The following directory was added:   /net/isf/isff/projects/METCRAXII/doc/MOTE_Statistics

Each directory contains a listing of the comment messages, and the serial number messages sent by the motes from respective locations.   The extracted messages are generated by /net/isf/isff/src/wisard_code/wisardMessageDecoder program, and there is a shell script to 'extract' them generated by listing the files found in the raw_data repository.   If you are wondering what mote sensors were attached at a particular date, check the 'sn' file.

Each directory also contains a 'raw-data-file by raw-data-file' listing of the mote message recovery statistics for each site/motes.   The statistics are generated by /net/isf/isff/src/wisard_code/wisardMessageStatistics program, and there are shell scripts for that per raw_data files as well.   The results files contain and explanation of how the statistics are generated.   NOTE: this program does not look at the sensor data itself, only the raw message recovery: ie if a proper mote message is received (prefix, eom, correct-crc) it is counted as good.   Good include 'power-messages' which were sent every 1min, and supercede data; ie. 11 of 12 messages are sensor data 1 of 12 power.    Recovery percentage is calculated assuming that each 8 hour file should have 'data-rate'/28800(sec) messages: ie 5760 for data motes and 2880 for power motes.

Here's are summary of the 'readme' files.

FLOOR NOTE: Flr recovery with xbee's in the early part of the project was worse than shown (see list).
The averages shown above include bunches of 100% data points for 8hour files after
Steve Oncley interfaced them using serial cables (on 10/17?).   It is unknown where the fixes
that recovered the xbee's (ie xr=0) at far/near would have been as successful in the crater.

NEAR NOTE: ID10 had redundant motes from 10/1-16; 1=SPN1 plus the 2nd=PwrMonitor
The average shown for ID10 takes the counts total from 10/1-16 and removed an assumed 100%
data recovery for the power monitor mote.   This can be seen in the associated excel spreadsheet

GPS NOTE: Some Location were obtained for the few hours that they were enabled on the motes.
The gps' were turned off to save power and prevent those messages 'clogging' the comm. channel
Without gps/time-keeping, the local data storage is worthless so that too was not used preventing
recovery of message outages.   Also Power Monitor motes don't have gps.

PWRMONITOR MOTES: Operated throughout the project without a reset, based upon their internal
data/time incrementing without interruption.  They were interfaced serially and 'outages' were probably dsm?

The down-facing pyrgeometer thermopile at FAR failed intermittently during the project.  It was essentially flat-lined from 09:10, October 7, until 17:25, October 12.  It appeared to be fixed by opening it up and disconnecting and reconnecting to wires from the radiometer to the embedded microprocessor board.  However it flat-lined again from 17:00, October 13, through 15:10, October 15.  This time we noticed that a bit of solder may have unintentionally grounded one side of the thermopile.  After cleaning this up, the pyrgeometer worked fine through the remainder of the project.

The data during these two periods have been deleted in post-processing.  The periods were determined from a time-series plot of Rpile.out.far, as well as an xy-plot of Rlw.out.far vs Rlw.out.near.  The periods estimated from the time-series plot were nearly identical those determined by selecting data from the residuals of a linear fit of Rlw.out.far vs Rlw.out.near.  The bad data were selected when the absolute value of the residuals exceeded 17 W/m^2.  See attached plot. 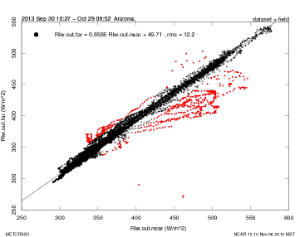 The FLR radiometers were not cleaned as often at the radiometers outside the crater and the upfacing pyranometer had periods of several days when it was contaminated with bird droppings while the SPN1 reportedly was not.  The question arises, how well did the SPN1 measure global incoming shortwave radiation?

I begin with a comparison of the SPN1 global radiation to Rsw.in from the K&Z CM21 at NEAR.

I need a latitude and longitude for editing the solar radiation data by sun angle.

Cannot currently access the GPS lat/lon, so use those measured by Oncley at the end of the project.  This is not all that critical for FLR and NEAR.

At NEAR, select data with sun elevation greater than 15 degrees (this limit is not critical).  The median ratio of Rsw.global/Rsw.in = 0.9938.  I note, however that there is hysteresis in the plot of Rsw.in.global versus Rsw.in.  This is consistent with the observation that the up-facing radiometers at NEAR were not perfectly leveled because of problems with the radiometer mounting device. 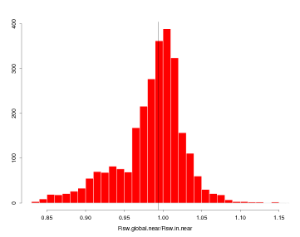 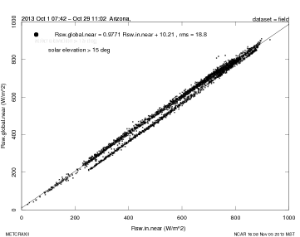 At FLR we select data with sun elevation greater than 20 degrees (to clear the sidewalls).  The median ratio of Rsw.global/Rsw.in = 1.0358, which is perhaps higher because the bird droppings obscured Rsw.in at times.  I conclude that Rsw.global could be used as a reasonable surrogate for Rsw.in during those times.   Rsw.in.flr data were deleted from Oct 14-20 when the residuals from a linear fit of Rsw.global.flr vs Rsw.in.flr exceeded 20 W/m^2, as indicated by the highlighted data in the right-hand plot below.  After deleting that Rsw.in.flr data, the linear fit changed slightly to Rsw.global.flr = 1.029*Rsw.in.flr + 1.07 W/m^2. 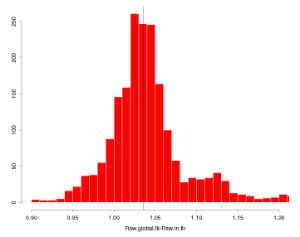 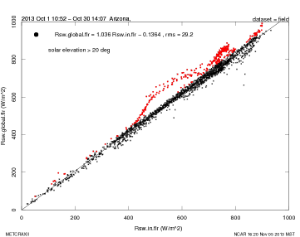 As we took instruments down, we (mostly) compared to the printed list from set-up.  Here, I'll copy down what we saw and indicate in red those sensors that changed.

We did not record TRH serial numbers, since those generally were not marked from the outside (and are recorded in the data stream anyway).  One exception is TRH.30m.near, for which #030 was replaced by #032 (number confirmed during tear-down).

None of the pressure array sensors or SSW sonics in the crater were logged at tear-down.

Yesterday, Tim, Kurt, John, Chris finished stripping rim and removed the top 40'.  I was given the day off to explore a larger hole in the ground.

Today plan to split into 2 groups: 1 to finish dismantling rim and the other to strip near.

- Near totally stripped, ready to be dismantled (also need to retrieve solar panels and rad stand).  Data taking stopped about 10:00AM.

- Base still has a wind sonic mounted (but not taking data since Thursday).

- Removed tower at base.

- Just have one tower section (deliberately) left at rim and the ISS 40' tower left to take down.