Still down, still needs to be replaced.

Still suspicious. A plot of ldiag.4m.v07 over the last several days is below, and the bad periods look diurnal. Maybe a temperature problem? This is an RMYoung, so I can look for a working RMYoung spare with which to replace it. 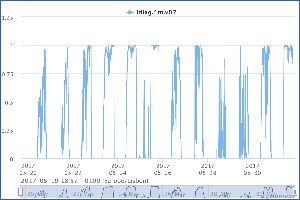 Still missing samples later in the day, but it doesn't look that bad judging from a plot of the last several days. I think lidiag is usually non-zero, so the only diagnostic that matters is how many of co2.20m.v06 and h2o.20m.v06 are missing.  It does look like it's getting worse, but I don't know of anything we can do about it since we have no spares. 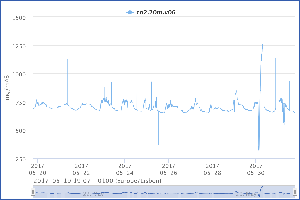 Still not there.  Steve says we have no more voltage motes, so it will never be there.

The ARL shipment did not arrive today. Chris says ARL is going to plan as if they won't arrive and make do with the instruments they have.