(late posting of this message from Friday)

CFACT is over!  (Though I still need to send follow-ups to landowners.)

Warm and some clouds.  Sebastian came to help and collect the remaining UU equipment.

CC: Used the forklift and lots of muscle to completely teardown this site.

UP: Removed this site.  Again, the soil heat flux plate was tilted off horizontal by about 5 deg and sensors in general seemed deeper, likely due to the organic layer (grasses) that makes the surface difficult to define (especially when frozen).

MH: Matt just tugged and both stakes came free.  Took less time than it took me to text Chris on another subject!

Organized/packed base and Penskes.  Still have a bit to do.

Remaining task: remove stuff (including transformers and job boxes) left at DCS and sort.  Then watch the base and maybe TTs go byebye.

Getting warm.  All of us were in shirts – no jackets or sweaters – and ran out of water.

Rented the forklift and used it to remove all fencing and posts (including some left by the PIs) at both supersites.  Pulled all equipment out of PRS, but still left a bit at DCS, primarily because it became too muddy to get a vehicle in.  Will have to revisit that on another morning.

Kept the forklift for another 1/2 day, since we haven't yet gone to CC.

A tiring, but productive, day.  Thanks, all!

ISS teardown is done.  Bill, Lou, and Liz left today.  For a couple of days, the ISFS crew is me, Clayton, Chris, Tony, Matt, Dexter.

Started by organizing into the 2 Penskes that will leave here and emptying out storage.  Returned 16' Penske since no longer needed.

Next, tore down LC.  Found that one manfrotto tripod foot was in the soil plot, perhaps 8cm from the Qsoil.  Not ideal, but might be okay with the data.  The qsoil probe came out with a crack in the lower prong, that we thought might have occurred on install.  Should check the Qsoil data.  Other sensors came out okay, albeit with a LOT of work.  Now, Sebastian's sonic is boxed up.

Next emptied stuff, oriented Chris and Tony to the base organization, and the other 4 went to lunch.

Next, tore down DC.  Soils were even harder, since the popsicle sticks themselves were buried.  Hot water trick helped, but still took perhaps 3 man-hours.  All probes recovered.  The ISS CS125 was loaded into the lidar trailer.

Next, tore down MW (in just 1 hr!).  Soils were easier, since top 2 cm were thawed.  However, managed to chop through the Gsoil sensor cable twice (itself, already repaired earlier).  Other 3 sensors were okay.

A long day, but good progress and a great team.

Tomorrow is forklift day.  Plan to hit PRS, then DCS for fenceposts, power, and other cleanup, then remove CC.  I hope this works!  I guess the worst case is we rent it for a second day.

Again fog and frost, but I digress....Clayton and I still are the primary ISFS crew.

Moved the reservation for the forklift from today to Wed.

Told Strawberry that we would return the 16' Penske tomorrow (after consolidating into the ISS Penske).

Drove up MH and removed (after a LOT of digging/pulling/prying) everything but 2 stakes holding the tower base plate.  Will have to return to this site (hopefully not driving).  Thanks Matt and Bill for helping!

Got lunch at the dairy.

With Dexter, pulled the DCS TT, still have one plywood pad frozen to the ground, but dug it out mostly.

Meantime, Liz, Bill, and Matt did the Penske consolidation.

And at the same time, Chris and Tony arrived after their Penske drive!

Again, some fog in the west in the morning, truck temperature +3F, seemed to be linked to the Deer Creek reservoir.  Left a lot of fluffy frost on the DCS tower...

Spent the day at DCS with Clayton, Sebastian, and later Matt and Dexter.  Removed everything except the primary fence, the AC service, and one argumentative fence post and ground rod, preventing the trailer from being pulled.  Also some hardware (e.g. 2 darkhorses and the Rohn sections) is still there.

Extracted all soils with a few nicks, but presumed working.  The heat flux plate was off of horizontal by perhaps 5 degrees and the TP01 foil was a bit wrinkled.

At the very end of the day, ran out to CC to soak the lock with Kroil.  It now works with the combination we expected.

Fog this morning along the entire west side of the valley.  SH, PC, and PRS are now down, along with all(?) of ISS, but perhaps there are some interesting data?

Fog this morning, but the program is over....  Truck thermometer said -1F when we drove out.

Started the day removing the TT trailer from PRS, along with remaining sensors.  A bit of an effort:

Next removed all of SP.  Not TOO bad, though a stake and ground rod required the Hi-Lift again.  Recovered all 3 power cables and all 4 soil sensors.

Spent a bit more time at the base and Penske organizing.

Finally, at CC, dug out all of the cables, tops of T stakes, and removed snow cover from the soil plot, with some help from Liz, Matt, and Dexter.  A lot of ice in spots – especially by the job boxes – and none of the 8(?) T stakes that I tried budged.  My intent was to prepare the site to have a quick removal with the forklift on Monday.  Now, I'm not so sure.  Oh, and we couldn't get the gate lock to open with the combo I had photographed on the marker board.  I need to see if I can find the original email from the manager.

Last IOP went until 8AM.  They got a good fog case and were very happy.

A long day just doing this, but progress....

Clayton, Sebastian, and I almost completely removed instrumentation from PRS.  The only sensors standing are the NR01, CS125, and a ceilometer, mostly because we didn't have shipping boxes. Almost all cables (except the main power) have been removed.  The TT is down and nearly ready to be pulled out tomorrow.

Was able to remove all soil sensors, in part because the ground never really healed after the install, so I was able to break open several of my "clods".

Spent day orienting Clayton and tear-down prep.  Picked up Penske and started filling with spare stuff going to Boulder and empty boxes for tearing down satellite sites tomorrow.  Grabbed a few more tools for the pickup.  Reserved an all-terrain forklift for Monday to pull out CC.

At the end of the day, reinstalled a bunch of thermocouples at DCS.  Lowered the tower to replace its thermocouples, but attempts to tilt blew the breaker on the generator.  We presume that the hydraulic pump is just too cold.  We raised the tower again, with no change to the instruments (of course).  Tower down from about 1720-1820.  I hope the thermocouples last!

BTW, noticed that the weather service radar (based on the one at SLC) is poor at detecting light snow.  The radar image showed that snow had passed Heber City by 2:30 today, when it was clearly snowing out my window at the Best Western.

Snow stopped and clouds broke up about 8AM.  A nice, sunny day for most of the morning.  Terry left about 15min before this happened, so never saw the mountains!

DCS: broke up a bunch of ice, freeing the main power cable.

Base: organized a bit, then a bit more!

Helped Bill with the 4pm sounding, since there was some wind and there were some gas issues.

The forecasted snow did come, starting about 5AM and continuing off and on through the day.  Accumulation about 2".

Spent the day touring with Terry and later Erik and Sebastian:

Jacquie and John departed, Bill is now here.  Thanks, so much, J&J!

Weather was clear, reasonably warm, but expecting snow tomorrow.  Ahead of the storm was a gust front at about 11:30 where speeds at DCS had a step change from 2 to 9 m/s.

No data issues starting out – the replacement CSAT at LC worked all night.  Nevertheless, I did the "ultimate" EOL/CFACT, by visiting EVERY EOL location today.  Since snow is predicted, probably through the end of the project, Sebastian requested that I pull at least the thermocouples at the satellite sites...

Terry arrived in time for dessert!

Weather:  Mostly sunny and calm. Highs in the mid 40's.

IRGA at the supersites - Noticed this morning that there was a long period of bad IRGA data at the super sites at certain heights. Up to 12 hours of bad data at some heights - longer than I’ve seen in the time series. In particular, heights

Zoom in on the past day 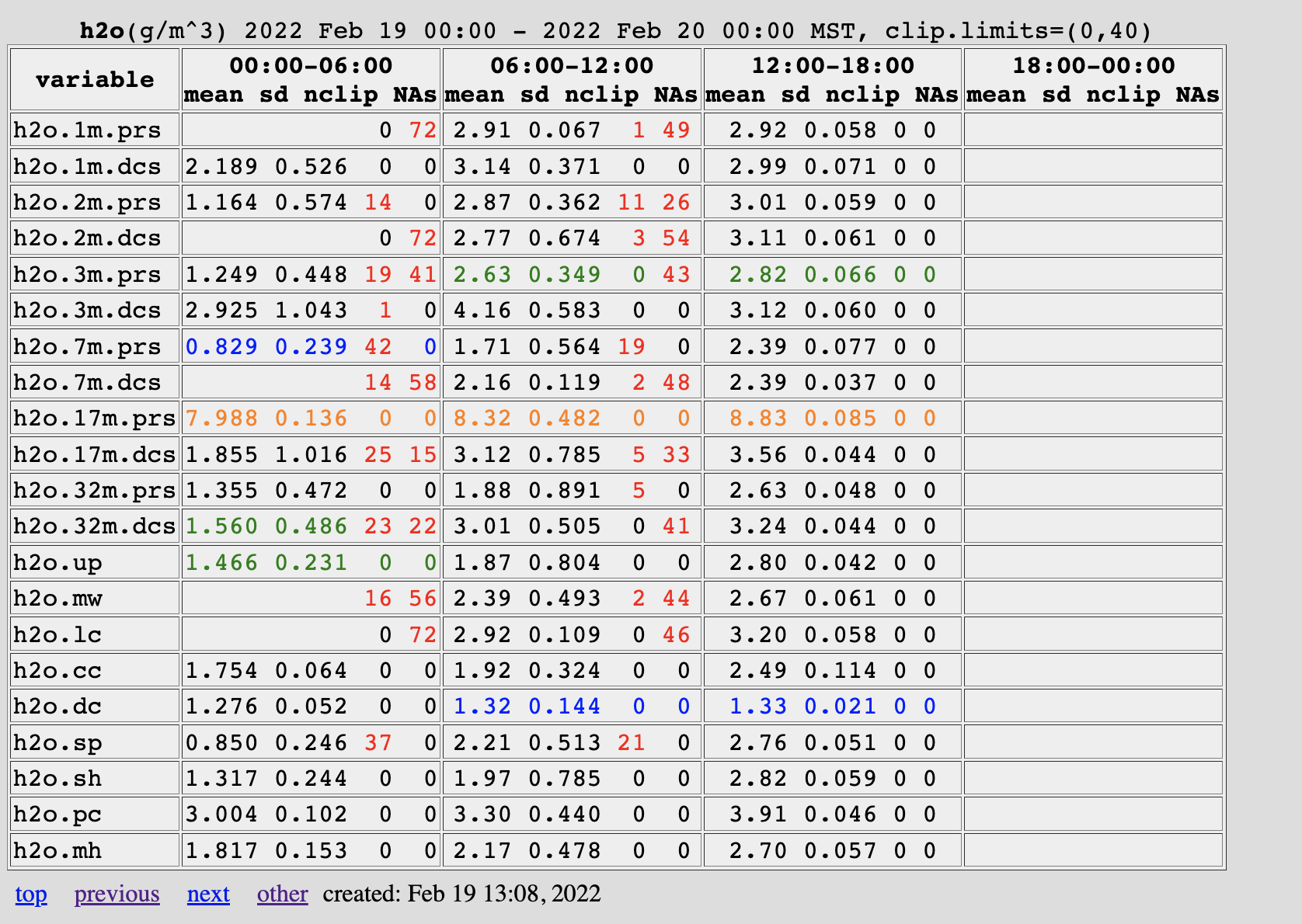 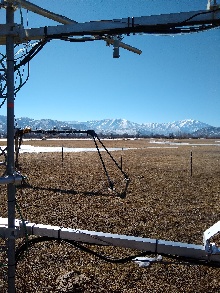 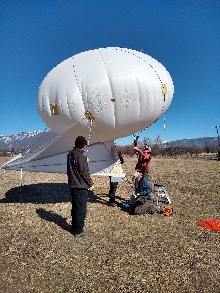 Mid-afternoon we did a second check of the data and sensors at ISS1 then drove to the radiosonde site to launch the 415p radiosonde. We had a pleasant surprise when the PI Zhaoxia Pu from U of Utah stopped by. She assisted filling the balloon and launching the afternoon radiosonde - see John's ISS blog post.

Today is the last day John and I are supporting CFACT operations in the field. Sunday, Steve and Bill take over (Bill arrives tonight). It has been eventful!

Signing off. Time for supper!